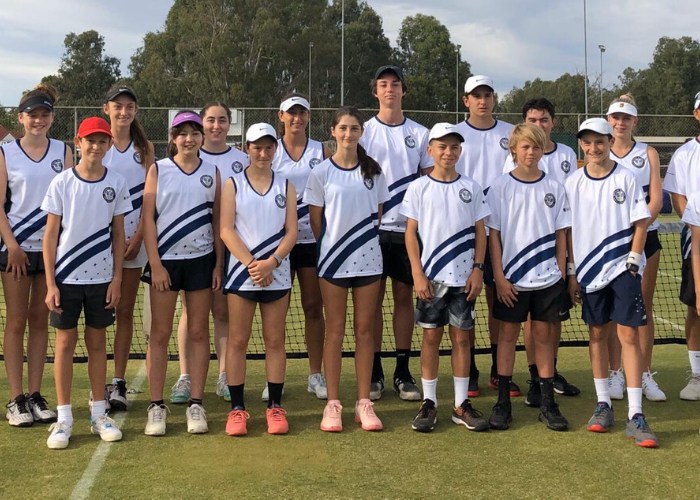 Bayside Regional Tennis Association came up just short after a magnificent weekend of tennis in Yarrawonga at the end of February.  It was the first time in the events 17 year history that BRTA had entered a team in this annual Tennis Victoria event.  Despite lacking experience it was a weekend none of the team members or support crew will soon forget.

Proudly supported by Bentleigh RSL and Hoyle DaSilva Lawyers the 16 players, team coaches, Managers and parents all did the association very proud finishing runners up to a powerful Waverley & Districts team who have won the event 4 of the last five years.

The Bayside team was:

The Bayside team had the most difficult draw en-route to the grand final of all 12 teams.  In the round robin pool we were paired with Waverley & Districts, Central Highlands and Loddon Campaspe.  A first up match against Waverley was a fearsome assignment but the young Bayside team jumped out to commanding 8-3 lead after the first 11 singles.  However the older players of Waverley put their heads down to ensure the favourites came away with a narrow 4 game win 13-93 to Bayside’s 11-89.  Next up was Loddon Campaspe who were no match for Bayside as we recorded a historic first ever win 20-117 to 4-52 over the 2015 Champions.  As play continued into Saturday evening Bayside took on Central Highlands and after a nervous 7-7 score line at one stage the 12’s and 14s got rolling to record a comfortable 16-100 to 8-58 win.

The majority of players stayed together in a large house sponsored by Hoyle DaSilva Lawyers and along with parents and coaches enjoyed a wonderful, albeit nervous pool party BBQ dinner on Saturday night.  Due to some long matches a number of teams had not finished their third round ties and would have to return early the following morning.  Going through to the 1-4 playoff would be the three pool winners and one team with the best percentage – it was a restless night hoping Bayside would sneak in ahead of the other 8 teams on percentage.  At 9.00am on Sunday morning when news came through that we had made it their was a rousing cheer throughout the house over breakfast.

Our semi-final was against the strong Eastern Region metropolitan Association.  Once again Bayside relied on a strong presence in the 12 & 14’s to jump to an early lead – however the 16’s and 18’s also came to the party and once the mixed doubles started we only needed to win two of the eight scheduled matches – which we did to record an emphatic win over the team that would go to finish third.  Not even a snake crawling across the Yarrawonga centre court during the 16’s mixed doubles could upset the Bayside team.

A rematch against Waverley awaited and the excitement and crowd support created a magnificent atmospher for some wonderful tennis.  Even Pat Cash’s legendary coach Ian Barclay was enthralled with the tight tussle and high standard of tennis heaping praise on both teams both at the presentation and individually.  Unfortunately for Bayside a few results were reversed from the first meeting with both teams winning and losing matches that were not predicted.  In the end both teams still had the opportunity to win as the last two 18 Mixed doubles took to the court with players lining the side of the court to cheer on every shot.  Waverley came out on top but we could not be prouder of the spirit, team work and sportsmanship shown by our players.  They can all be proud of their efforts.

A special mention to Florian Kostov, Savannah James & Amelia Zymberlman who went through undefeated in singles for the weekend and Erin Maguire who went one better by not dropping a match winning all her singles and mixed doubles.  Thank you to Black Rock Tennis Club for the use of their grass courts to train the team, Cliff Lubbe and Grove Bennett for giving up their weekend to provide outstanding leadership to the Bayside Juniors.