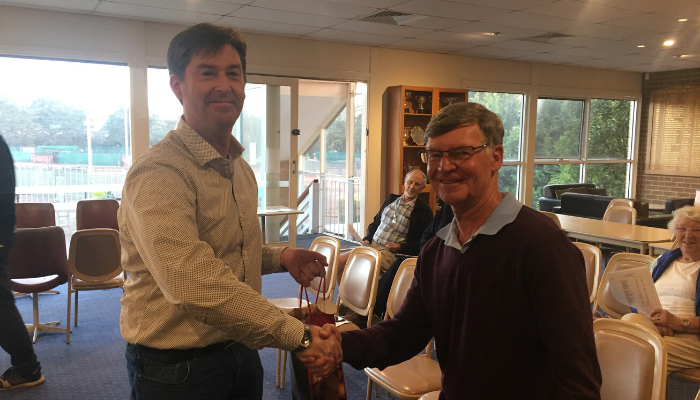 At last nights Dendy Park AGM they recognised club stalwart John Riley with honorary life membership.  John has been a member at Dendy Park for 50 years and joined the club when it moved to its current location in 1970 from Elsternwick Park.

Dendy Park President Dr. Tim O’Shannassy bestowed the honour on John and congratulated him for his contribution to the club and his understanding of both the competitive and social side of the club community.  The Club is an important part of John’s life and he proudly boasts 54 consecutive years of playing in Tennis Victoria’s premier graded pennant competition.  Interestingly enough when John played earlier this year as an emergency for Dendy Park against Mornington in Grade 4 it was the highest grade he had ever played.  It was also noted that John is one of those rare players that plays better under lights than during the day.  John first met Tim in the 1980 C grade Club Championships final and they have remained good friends ever since.

During the meeting Dr. O’Shannassy outlined a range of challenges and opportunities to the membership that are in front of the club as it moves into the next decade.