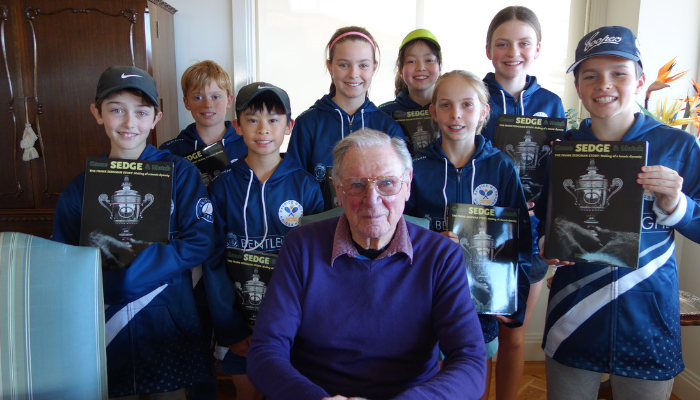 The Frank Sedgman Cup is a Tennis Victoria Annual Teams event consisting of 2 boys and 2 girls in the 11 & Under age group from country regions and metropolitan Associations throughout Victoria.

This year’s event is being held in Traralgon 27-28th July, 2019  Two teams have been entered from the Bayside area – one representing Bayside Regional Tennis Association and the other Moorabbin & Districts Junior Tennis Association.  The competition started in 2006 and neither association has ever won the event despite coming close a few times.  Let’s hope the 13th instalment is lucky for one of the local teams.

The children have been training hard which has included squad sessions with Cara Black, Brett Stephens and Port Melbourne Tennis Club Head Coach Marvin Barker in the lead up to the event.

The eight children were excited to spend about an hour with 91 year old Frank Sedgman at his home yesterday.  They got to see a collection of memorabilia from his tennis career including trophies (except for the ones in the Kooyong Museum) and memento’s that he gathered over the past 75 years in tennis.  Each child asked him a question and Frank regaled them with stories about Grand Slam victories, Davis Cup challenges and various experiences he had from a lifetime in tennis.  He gave them advice with regard to preparing for a big match or how to maintain a lead in a match.  He also talked about his respect for Roger Federer amongst the games current players.

The children were amazed that a days per diem with the Davis Cup squad back in the 1940’s and 50’s was 25 shillings ($2.50 nowadays) and for winning Wimbledon as an amateur he received a GBP30.00 shopping voucher to the famous UK sports store Lillywhites.  A far cry from the GBP 2.35 million that both Novak Djokovic and Simona Halep took home this year.  The children also discussed the differences between amateur and professional sports and the challenges Frank faced while transitioning between the two.  They also discovered that both Frank and Australian tennis great John Bromwich travelled by boat to Wimbledon a couple of years – taking 5 weeks in each direction due to John’s fear of flying.  Frank also travelled by flying boat to London – stopping overnight in hotels along the way because flying boats could not travel overnight.

Good Luck to both teams this weekend.