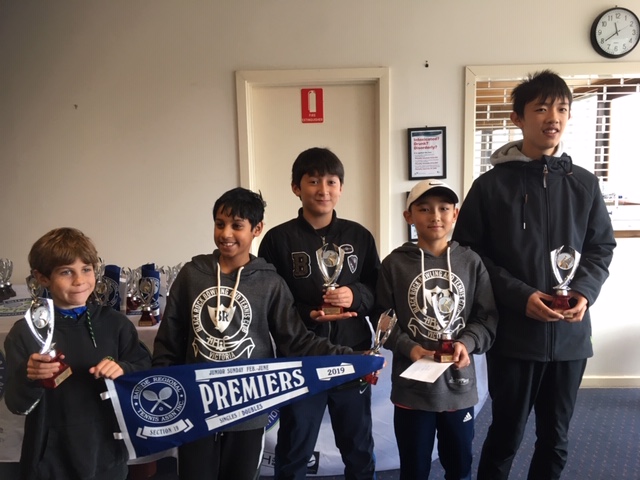 Under clear skies on Sunday 23rd June, 2019 fifty 18 & Under teams took to Bayside courts to battle out their respective Grand Finals.  Boasting a record 25 Sunday morning junior sections, 200 teams and over a 1000 players represented their local clubs in the quest for finals glory.

Dendy Park hosted the trophy presentations which saw a large crowd enjoy each winning and runner-up team share a few words of thanks to their parents and team mates for their support throughout the season.   The spirit and camaraderie between teams was evident as each result was greeted with generous applause.  BRTA President, Vice President of Tennis Victoria  and Tennis Australia delegate Mark Da Silva was on hand to present the trophies and pennants.

Amongst the day’s highlights was:

·         The completion of BRTA’s first ever green ball competition – in fact their were three green ball sections and the competition is a welcome introduction to our regular competitions for the future.

·         The awarding of the annual Darryl Cox Shield for the best performed team within a section to Glen Eira Tennis Club.  While Glen Eira was runner up in section 24 to Dendy Park the winning of this prestigious shield eased their heartbreak.

·         For the first time individual player awards were made to the best performed player on each Grand Final Team.  Thank you to Bentleigh RSL for sponsoring this award.  One notable recipient was Section 5 premier Cruz Hewitt – following in his illustrious father’s footsteps.

·         The section 1 honours were shared between Royal Avenue and Kooyong Tennis Club after a result could not be reached.  Great work to the players and parents involved in reaching this position after a close match.

·         Carmelite and Kooyong took out the Saturday morning competition in Sections 1 & 2 respectively.

The weekend of 20-21 July, 2019 sees the start of 2019 Spring season.  Good Luck to all players and thanks for a wonderful Autumn Season.